My name is Alison and I’ve dropped in to discuss calligraphy, which is about as arty and crafty as I get. I’ve tried embroidery, knitting, counted cross-stitch, quilting, tatting lace, and while I love them all, I usually don’t have the patience to finish, or my cat decides to “help” and there goes my string. (But he just looks so happy!) I cannot draw or paint or sculpt or anything that requires artistic talent in that way; I have issues drawing stick people. But calligraphy! Something about it soothes my soul, to watch the ink flow and create these beautiful letters and words and sentences and I feel like we’ve lost something over the years in our handwriting as a society and the vintage-lover that I am, it just works for me on many levels. (That and it takes way less time to ink a phrase than it does to knit an afghan.) My grandmother had perfect Palmer handwriting. (“Had” because she’s got Parkinson’s and now she shakes too much.) My mother, who can fit more on a page if she handwrites it instead of typing it, also does calligraphy and as a kid I’d pour over what I called her “font book.” I have no idea the actual name of this book, but it had sections for every upper case letter in each font, and every lower case letter, and then the complete alphabet for each font, and I would spend hours looking at this book. I think part of why I enjoy it so much is that it’s very repetitious and orderly to learn, yet so wildly creative to actually do. The dichotomy is appealing. I do my calligraphy for me, mostly. I can’t really think of a time when someone’s asked me to ink up something for them, but I have a few ideas for Christmas presents for friends. I did design one of my tattoos, however, using one of the fonts I found in the font book.

(A picture of the ink! It says, “be a perfectionist / you’re nothing if you’re just another” from The Birthday Massacre’s “Goodnight.” Great song.) 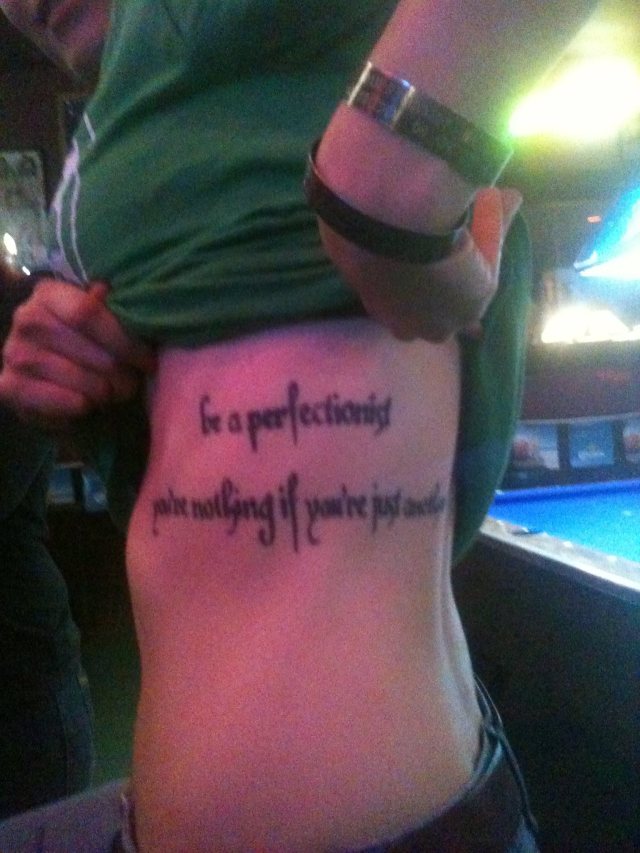 A brief history of calligraphy: it’s predominantly found in Europe, Asia, and the Middle East, although the Mayans had calligraphy, as well. The word itself comes from the Greek and translates into “beautiful writing.” Western calligraphers traditionally use a pen with a nib, and Eastern calligraphers tend to use brushes, although depending on where you are in Asia, that can vary. Calligraphy is a gorgeous and highly valued element of Islamic art, and Islamic cartographers use pens made from reeds. Calligraphy started to fade in importance once printing became standard, but never truly passed into history. The modern revival began in the late 1800s, led by Edward Johnston as a part of the Arts and Crafts movement. Wikipedia has a long article with lots of links to the specific kinds of calligraphy (Western, Chinese, Japanese, Korean, Islamic, Indian, Nepalese, Mayan, etc.) for those of you interested. (There’s a Links section at the end of this post.)

I’m currently working on teaching myself Spencerian script. Back when our great-great-grandfathers were trudging through snow, uphill, both ways, to get to school, handwriting was still a subject actually taught in school. Platt Rogers Spencer developed it in the 1840s as an oval hand which could be quickly written yet remain legible, to be used for business and personal correspondence. (The logos for Coca-Cola and Ford Motor Company are in Spencerian script.) Spencerian script was the standard until typewriters became common, and was gradually replaced with the Palmer method in the 1920s. The Palmer method was replaced with Zaner-Bloser, which was almost immediately replaced with D’Nealian, which is what I was taught in school. (Does my day-to-day handwriting actually look like it? Heck no!) D’Nealian was first introduced in 1978 and is still being used today, I believe. But I digress. Back to Spencerian! The Spencerian script wasn’t just how to form the letters; it included a fair amount of theory on proper penmanship. For example, students were taught how to properly position themselves at a desk (using either the front position or the right position, you lefties are screwed); how to properly hold a pen, including very precisely exactly where fingers are placed; and how to properly move one’s hand and arm. (I don’t remember being taught any of that under the D’Nealian system.) The theory also covered definitions of lines, kinds of lines (straight, curved), styles of lines (right curve, left curve, vertical, horizontal), angles, measurements of angles, and students had to draw examples of all of these and indicate the angles on graphs. There are Seven Principles according to the Spencerian System: in order, they are straight line, right curve, left curve, extended loop, direct oval, reversed oval, and capital stem. There are different kinds of letters: small letters and capital forms. There are classes of each kind of letter, divided by letter height. Students were required to measure and analyze every letter, small or capital, and say which Principle applied to each stroke of creating the letter. Letter and word spacing was specified in detail, as was creating shades (the thicker bits of a letter) and how to create figures (i.e., numbers).

A few examples of the instruction:

On the Capital O

On the small N

And et cetera. You get the idea. If you don’t get the idea, here are my attempts at Os and ns! (Although technically, the Os are “Omen” and the ns are “ni” – perhaps Spencer was a time-traveling fan of Monty Python and the Holy Grail?) (Also, prime opportunity for a “bad omens” joke.) (In my defense, I did skip ahead to Copybook the Third for those Omens.) (Wow. Many parentheses. Much grammar.) My nis aren’t too bad, actually; you can see where I switched my position a little and I think I got a huge improvement in quality from that switch. Must reread front and right positions! My Omens need work, but I’m reminding myself I skipped a copybook to have the example. The slant is incorrect – I’m far too upright – and my letter spacing is too narrow. However, I did notice when writing out those Omens that practicing proper letter creation gets easier when you’re in the rhythm of using the (writing with the?) script. I can see how it lives up to its ideal of being written quickly yet legibly.

Students had five copybooks with which to practice their penmanship. The first copybook, which I’ve just started, covers all the short letters (letters which neither ascend nor descend, like e, r, s,  or a; there are thirteen). Only four principles are needed to create these letters. The second copybook adds t and d, and the figures 1 through 9. Book 3 completes the lower case letters and adds most of the upper case letters. Book 4 completes the entire alphabet and starts introducing the letters as they appear in words. The final copybook practices sentences and sayings, such as, “Promise little and do much.” (Oh, the manners of the 1800s!)

Here are a few pictures of the theory and copybooks. You can (kind of) see my pencil-based attempts! Rest assured, I will be filling in the remaining black spaces. I will probably also order another set of copybooks to practice with my pen & nib once I feel comfortable with forming the letters. 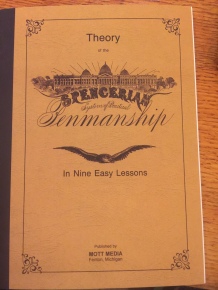 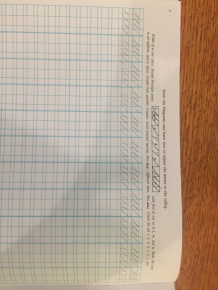 And since I feel like I’ve typed up a wall of text: here, have a link to a video of the theory and copybooks!

Hm, what else. I’m currently reading quite a few things, actually. I enjoy fan fiction and I’m on a Kingsman kick and a Teen Wolf kick with twenty-some stories open across various tabs on various electronic devices with internet access. I’m also rereading Georgette Heyer’s Sylvester, or The Wicked Uncle for the I-don’t-know-how-many-eth time, and I’m studying Irish pub cookbooks and Alton Brown’s “Good Eats” cookbooks for ideas and concepts. I’m trying to eat healthier but woman does not survive on kale alone. (And kale tastes horrible, anyway.) My favorite book, and here we’re defining “book” as “a specific physical object Alison can hold in her hand,” is a copy of the collected works of Oscar Wilde that my grandfather gave me one year for a birthday present, bookmarks carefully placed to indicate his favorite stories. I have never removed those bookmarks, and out of all the things I own, I would reach for my cat and that book if I had to evacuate in an emergency. But if we’re talking “book” as in “story,” well, we need a few categories on that! Favorite authors include (in no particular order) Jane Austin, Georgette Heyer, Oscar Wilde, Rex Stout, Robert Frost, Agatha Christie, Ian Rankin, Arthur C Clarke, Isaac Asimov, Ray Bradbury, Robert A Heinlein, Edgar Allen Poe, Daniel Silva, Aleksandr Solzhenitsyn, James A Michener, Rudyard Kipling, and Bill Watterson (he of the most excellent Calvin & Hobbes). I cannot possibly list my favorite stories, but along with the majority of the works by the previously mentioned authors, I also enjoy the traditional folk and fairy tales from around the world (not just the Western stuff, y’all) that have no author, only gorgeously illustrated retellings.

First and foremost, I copied heavily from Mott Media’s edition of Theory of Spencerian Penmanship, copyright 1985, in my paragraphs about Spencerian penmanship. My pictures are of their theory and copybooks, too. You can find it on Amazon here: https://www.amazon.com/Spencerian-Penmanship-Theory-Book-copybooks/dp/088062096X/ref=sr_1_2?ie=UTF8&qid=1499139428&sr=8-2&keywords=theory+of+spencerian+penmanship

Originally published and copyrighted in 1874 by Ivison, Blakeman, Taylor & Co.

(Not a link, but credit must be given: the title of this post is from George Bernard Shaw’s “Pygmalion,” which is the play “My Fair Lady” is based on.)

2 thoughts on “the beauty and nobility, the august mission and destiny, of human handwriting”