Thank you, Karin, for inviting me to post on your site, and for allowing that cooking is a craft.

My name is Jackie North and I write m/m romance. The “m/m” stands for a relationship between two men, and the romance part speaks for itself.

Why do I write m/m romance? Here’s why. Back in 1993, I went to a Star Trek convention where Leonard Nimoy was speaking. Someone in the audience asked him if he knew what K/S was and if he’d ever read any. The whole crowd (standing room only) moaned and I wondered what all the fuss was about.

Mr. Nimoy, gentleman that he was, said, “Yes, I’ve heard of it but I’ve never read any.” Then he added, “However, I know for a fact that  Bill (Shatner) has a stack beneath his bed.” That made the crowd laugh, though I’m sure they didn’t believe him.

I asked around and discovered that K/S was fan fiction about the love story between Captain Kirk and his First Officer, Spock. From the first one, I was hooked, not only by the romance but also by the passion with which fan fiction authors told the story. After that, I tried writing my own K/S and loved it.

Today, rather than writing about a starship captain and his space husband, I’m writing a series called Love Across Time. The first book is called Heroes for Ghosts, about a WW1 soldier who time travels to present day to meet a history student who is obsessed with WW1 soldiers. It’s a match that was meant to be, and readers, I’m told, enjoy it very much.

The second book in the series is called Honey From the Lion, and tells the story of a young software developer who goes to a dude ranch in Wyoming only to find himself lost in a blizzard in 1891. As luck would have it, he stumbles across a cabin in the snow that is inhabited by a gruff, burly guy who only wants to be left alone. It’s a match made in heaven, of course, and they quickly fall in love. I have four more stories planned for this stand-alone series and am looking forward to sharing them with readers.

The theme that all of my stories share, from my first fan fiction to my most current work, is the idea that food is love. There are many kinds of love, of course, but to me the gift of food and of cooking is among the purest.

As to why this is so, I can, though with some difficulty still, admit that growing up I was a hungry chiid. While other kids had lunch boxes full of food, or punch tickets for the lunch lady, I had nothing to eat.

Sometimes I’d have a baggie of Captain Crunch and would beg one of my friends for a nickel so I could buy a carton of milk. Most times, though, I had nothing, and (according to friends, years later) when they asked where my lunch was, I would tell them I wasn’t hungry. In truth, I was typically very hungry.

At home, there was plenty of liquor in the cupboard, and cigarettes in the drawer. There were donuts and grape soda, and once a week, fresh white bread and margarine. I would let the margarine soften, spread it on the white bread, and smother the whole thing with sugar. That was breakfast.

Once living on my own, I would check cookbooks out of the library, or buy them used, and would try out all the recipes, enjoying each and every one, even the failures. And then I ate.

I also read, with rapt attention, any book where the character was hungry and would rejoice when the character was fed. Oliver Twist and I were bosom companions, as you can imagine. What Laura Ingalls ate, I wanted to eat. When Sara Crew in A Little Princess gave away five out of the six fresh, hot buns she’d just gotten from the bakery I always shouted, “For pity’s sake, Sara, keep three for yourself at least!” But no, she never did.

In later years I read a book called The Mirror by Marlys Millhiser. It’s a time travel story about a woman who goes back in time through a mirror, and her granddaughter comes forward in time through the same mirror. Essentially they trade places, and I adored this story with all my heart. Still do, in fact, and have an autographed copy, which I treasure.

In Chapter 15, one of the characters (Hutch) is eating breakfast, and this is how the author described it:

When his food came, he smelled in the coffee steam from his cup, let tough juicy steak linger on his tongue…The yellow of egg yolk, the warm filling taste of it on a hunk of bread. The salty tang of a fried potato followed by the smooth heat of coffee.

When I read that, I could practically smell the coffee and taste those eggs. And knew that I’d found what I didn’t even know I was looking for: that writing about food in a story allowed me to experience eating food without actually eating it. Consequently, every single one of my stories has food and hunger as a central issue and theme. Add food to an m/m romance and to me it’s the perfect combination.

Here’s a scene from my upcoming book Honey From the Lion where food is central:

“Eat your supper,” said John. He pointed at Laurie’s plate with his spoon.

“I said I’m not hungry,” said Laurie with a shake of his head.

John suddenly got up from the table, scraping his chair across the wooden floor, startling Laurie into sitting up straight. But then John went past him and went to the pantry, and Laurie let out a slow breath.

John went down into the little root cellar, and when he came back up he had two canning jars in his hands, which he placed on the table with a clunk. He sat down and took one of the biscuits, sliced it, and slathered it with the white butter. Then he took a spoonful of something that looked like red vomit from one canning jar, and drizzled what looked like honey from the other. He handed the whole mess to Laurie on a small blue and white china plate.

“You can’t go to sleep on an empty belly,” said John. “So at least eat that.”

Laurie scrubbed at his chin, not knowing what to say to this sudden display of care. What if John was like one of those guys who beat their girlfriends and then apologized with roses, only to have the whole cycle start again the next day? He couldn’t deal with that, couldn’t put up with that. But he was too exhausted to leave for Farthing, and besides it was dark out.

“Rhubarb compote,” said John. “A woman in town makes it, along with the tomato preserves and suchlike that I have in the cellar. Try it, it’s sweet, for she makes it with sugar.”

“I save it for special occasions,” said John, and it seemed to Laurie he was somewhat defensive about this, as though a burly, strong man shouldn’t have any weaknesses, or a soft spot for honey.

“Don’t save it for special,” said Laurie, in an almost scolding way. “Now is special.”

He meant to say it in a way to explain to John how he felt about always putting off the nice things, like the people who bought super expensive towels that only guests could use, which was ridiculous. Possibly John had been planning to save that honey to celebrate with when he got his pay in spring. Except now he’d opened it for Laurie, so now it was Laurie’s duty as a guest to eat it.

He picked up the ladened biscuit, and he bit into it. The inside of his whole mouth turned into a mix of flavors he’d not been expecting, the tart with the sweet, and the fat of the butter. And he found he’d eaten the entire thing with a few swallows.

The result of all my love of food is that I have a ton of cookbooks, and printouts of recipes from the internet.

I’m an avdid fan of Headbanger’s Kitchen you Youtube (his recipes are so delicious!), and can be quickly drawn into any cooking show that involves a lot of butter. 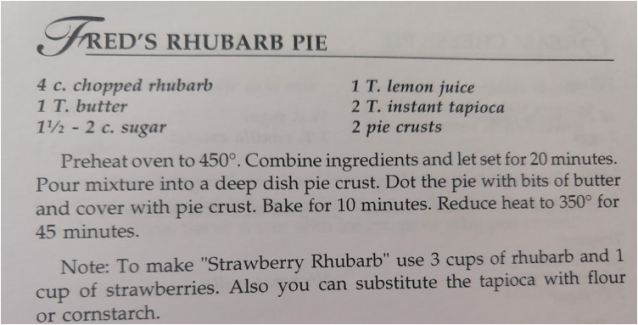 Have a green thumb…

And my writing desk is typically a mess.

Thank you for allowing me to visit the Another Peice of Me blog. If you’d like to connect with me online and perhaps read some of my food-centric books, please join me on Facebook or Twitter. Alternately, you can sign up for my newsletter, or email me at jackie@jackienorth.com, as I love connecting with readers.

One thought on “Dishing Out the Love”