Hi, I’m Brigham! I’m a full-time author and lover of all things creative. Other than writing, cooking and photography are the two big outlets for my creativity these days.

Hands down, my favorite author is Margaret Atwood. I fell in love with her writing when I read “The Blind Assassin”. I tore through the rest of her novels and poetry and she has been a writing inspiration since. I cried when I realized my writing would never sound like hers. I had the good fortune to meet her in person this fall. I was in Stratford, Ontario to see two of their Shakespearean productions. That same weekend, she was doing an author lecture about her latest book, “The Hag Seed”, a re-telling of “The Tempest”. I was able to hear her read from it and do a talk about it, and then meet her and get an autograph. It was a wonderful moment and she is truly lovely in every way. 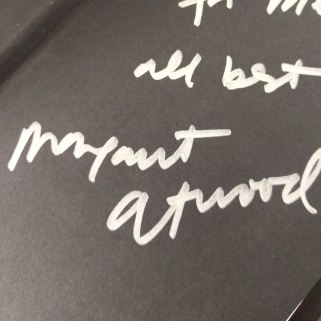 I enjoy a wide variety of other books as well, although historical mysteries will always be a favorite. I am building a collection of the mid-century printing of the Nancy Drew series that I read as a kid.

I write LGBTQ contemporary romance. I have a mix of short stories, novellas, and novels. At this point, all of the stories I’ve released are gay male romance, but I have a lesbian romance in the works. Many of the gay male romances I write include bisexual men. As someone who identifies as bisexual (or pansexual) I am always careful about bi visibility.

My current writing project is about sixty percent done. It’s about a gay man named Chris whose brother, Cal, dies unexpectedly. At Cal’s funeral, Chris learns that Cal was bisexual and has been dating a man named Elliot. As Chris grapples with the fact that his brother was hiding his sexuality from the family, he and Elliot grow closer. Overwhelmed with grief and guilt, they struggle to admit their feelings for each other and figure out how to deal with Chris’ secrets and come out about their relationship.

Here’s a little teaser from it.

Exhausted and mentally drained, I escaped out the back door of the house, needing a moment to breathe. I ended up on the deck off the kitchen, lingering in the doorway as I stared out at the yard. Even in January, the grass still had patches of green, and it had started to rain—a cold drizzle that would force me back inside before long. A soft sound caught my attention and when I turned my head, I spotted the dark-haired man from the funeral leaning against the back of the house, sheltered from the rain by the deep eaves. His eyes widened when he spotted me and I jumped when the door behind me slammed shut. My lips parted but nothing came out. I had never expected to see him here.

His only response was a laconic nod of his head. I leaned against the closed door, huddling in on myself. Unfortunately, I’d come out without an overcoat on so I knew I couldn’t stay out long. I was desperate to know who the man was though, so I’d have to think fast. “Did you know Cal well?” I blurted out when nothing else came to me.

He took a long drag on his cigarette and tilted his head back to blow the smoke at the sky. “Yeah, you could say that.” His voice was husky but I couldn’t tell if it was from smoking, suppressed tears, or was naturally that way.

“Skydiving buddies?” I asked, my tone joking. “Pottery lessons? The Peace Corps?” With my brother, all were possible.

“Lovers.” The silence that followed his statement stretched between us as I gaped at him in shock. The man snickered but there was nothing remotely amused about his tone. “Yeah. Together more or less exclusively for six fucking months. I was his dirty little secret.”

“I—I’m sorry. I have … had no idea Cal was seeing anyone. I didn’t even know he was … bi. Christ, I’m so sorry.” I could barely string together words and the exhaustion and grief had already numbed my brain.

“Yeah, he didn’t want to tell anyone. Said it was because of you.”

“Me? I—I don’t understand.” I blinked stupidly at him. “I’m gay and our parents were plenty supportive. Why would Cal be worried about coming out to the family?”

“I don’t know, maybe because your parents desperately wanted someone to carry on the Allen name and genes,” he replied bitterly.

“Oh, shit.” That rang true, my parents had been eager for grandchildren, and although they would happily welcome any child I brought into the family, adopted or not, I knew they hoped a future partner and I would choose to have a biological child of mine. I’d certainly felt quite a bit of pressure about it over the years and I had known on some level that they were grateful that Cal would presumably marry a woman and pass on the genes and the family name.

“I am so sorry; I had no idea. God, if I’d known …” I felt my knees sag and I was suddenly grateful for the siding holding me upright.

He scowled at me. “You’d have what? Gone straight? I know better than anyone it doesn’t work that way.”

“No! Of course not. I just wish I’d known,” I whispered. “I would have supported him. Helped him tell our parents. I … I suddenly feel like I didn’t even know my own brother.”

The smile he gave me was melancholy. “I’m not sure anyone really did. Cal was larger than life. Too much for any one person to grasp. Maybe I was crazy for thinking I could ever keep him as mine.”

“You had him for six months. That’s longer than most,” I pointed out.

He was silent for a long moment before he dropped the cigarette and ground it under his heel. “You were brothers for twenty-eight years. Was that enough?” He turned and walked toward the front of the house.

I opened my mouth but there was no good answer. The answer was no. Of course. No amount of time with Cal would have ever been enough if you knew him. And this man had loved Cal, I had no doubt about it.

“Hey, what’s your name?” I managed to choke out.

“Elliot. Elliot Rawlings,” he threw back over his shoulder as he disappeared around the corner.

“Nice to meet you, Elliot Rawlings,” I whispered.

I am not sure exactly when the novel will be released, but it’ll likely be late this winter (I’m aiming for January/February).

If you’d like to check out some of my other work, please stop by Amazon page:

My books are also available on All Romance, B&N, iTunes, Kobo, and Smashwords.

I need to start this with an apology. I had a guest post planned with a recipe for turkey and wild rice casserole. I created the recipe and thought it would be fun to do a step-by-step recipe post. Except apparently my brain is a little too full these days. I forgot to take a single picture of the recipe as I made it and, I’m embarrassed to say, forgot about the guest post until Karin checked in with me. *headdesk*

In lieu of a recipe, I am going to talk about one of my other creative outlets: furniture refinishing and painting. My grandma was always picking up furniture at garage sales and the side of the road and fixing them up. I inherited that urge and I have a handful of projects I am really proud of.

One of the most extensive projects was refinishing an antique wooden desk. When I saw it at the side of the road I knew I had to get it. The finish was trashed, there was a foot coming loose, and a most of the hardware was missing, but it had beautiful bones. It took a long weekend to fix up. Once the foot was reattached and the hardware was off, I used a gel stripper and a plastic putty knife to remove the old finish. I’d never done it before but it was easier than I expected. A toothbrush helped to get in the little cracks and some old T-shirts worked great to wipe it down. I did the work outside in the driveway and the fumes were minimal but I still used a mask and rubber gloves to be safe.

Once the old finish was stripped off, I used sandpaper and steel wool to give it a nice even surface. A few coats of stain gave it a gorgeous color and once that was dry I used several coats of a rub on finish.

Replacing the hardware turned out to be the biggest challenge. Despite diligent sanding, there were grooves in the wood from the old hardware and it was impossible to find new hardware that would cover those. I eventually settled on a basic handle and used washers behind it to hide the grooves. A quick spray of a flat black paint gave the handle and washers a uniform color and texture. In the end, I was incredibly pleased with the results.

The design of the top drawer allowed me to add a thin Masonite board and use the desk as a keyboard and mouse tray. It is now my writing desk and I spend a good portion of my day at it.

My next project was a small stand that I’d inherited from my grandma. It wasn’t particularly high-quality wood or in great shape, but it hand sentimental value. Initially, I used a glossy black spray paint but I didn’t do a great job with it so last fall I sanded it down and with the help of my dad, added a back (there had never been one before) and filled in as many of the nicks and gouges in the wood. Some thorough sanding gave it a nice finish and I rolled on a flat charcoal grey paint. I rubbed on a clear wax finish and painted the old hardware a soft gold.

It sits next to my writing desk and holds paperwork and supplies.

My current furniture project involves two large dressers that were found on the side of the road. The neighbor had been storing them in his garage for years and apparently their cat (!) had been gnawing on the corners. It took quite a bit of wood filler to fix the corners and a thorough sanding to get it ready. Although I liked the white paint, it had gotten pretty dingy over the years so I’m in the process of giving it a few coats of a nice bright white finish. 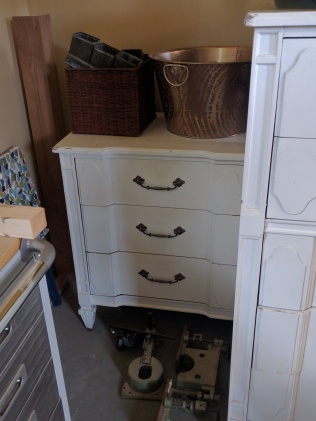 The hardware was a dull brass but all of the pieces were there so it’s been painted a flat black. I am SO excited to finish it because I could really use the storage space. It’ll be the most dresser storage I’ve ever had!

Thanks for stopping by to learn a little bit more about me. And thanks to Karin for inviting me to be here and for her patience with me!

One thought on “Forgetfulness and Furniture”