Hello! My name is Miya, though most of you probably know me as Fiberkitty. I’ve been going by The Pixeled Pixie lately, but that’s what happens when you let your kids name your business. I’ve known Karin/Naelany for… eight years, I think. My twins are eight now, and they were four months old when I discovered fanfiction, so yeah, that makes it eight years since I’ve met most of you.

Crafting, Momming, Writing, and Caffeinating really are my life.

Crafting, child-rearing, composing, and caffeinating are my life. There. That sounds better to me.

I’m a stay at home / work from home mom, and I juggle my numerous crafts with writing, playing Pathfinder adventures, drinking a ton of coffee, volunteering at a local LGBT Center, working for a cat rescue, plus all those pesky parenting duties that make me have to do serious things like play nicely with others at PTO meetings.

I like to play with fiber: spinning it, weaving, knitting, crocheting, bobbin lace making, and even some felting.  My spinning wheel is not used nearly as much as it would like, but I hope to give it some loving care and attention this autumn as the weather is more conducive to thinking of the warmer crafts I like to play with.

These are drop spindles we made for our girls’ 4H club. We took in a box of different types of fiber from various animals, and we taught the kids how to spin. 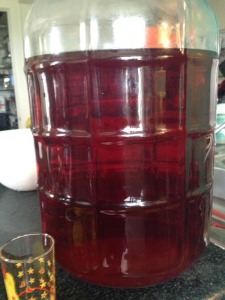 We thought that was a better hobby to share with the club than our mead making. 😉 We recently bottled our Promiscuous Pixie Punch, an elderberry damiana melomel that is super tasty. The berries came from the bushes in front of our house.

Spinning and mead are not my only shareable crafts. I come from a long line of quilters, but it was a skill I did not take joy in until recent years. The squares in this Zelda quilt birthday gift were each 2 1/4 inches before being sewn.

My husband and I both spin and knit, but now he’s more into playing with his 3D printer than with fiber. We’ve been making cookie cutters, Pokemon pins, and magnetic runes. Here is the roof to a blacksmith’s forge that he’s printing for me to paint.

It’s a fun hobby for him, and it’s become a side business for me as I try to keep track of orders for pins and magnets.  One of our fun projects that I’m working on designing are custom bookmarks to go with all of my published books. The base of it would be a paperclip style while the top would have a design to coordinate with my books.

Gah! So many plot bunnies, and so little time. I spent three years mostly on hiatus from doing more than poking at a few keys on the keyboard while pretending to think about writing. My brain was pretty broken from seizures. It took two and a half years on an anti-seizure drug followed by a year on anti-anxiety medication to make my brain function. As it is, when I wrote fanfiction in 2008-2010, I could write 10,000 words in an afternoon while still maintaining the house, kids, and doing data entry for the cat rescue. Now, I’m happy if 1,000 words leave my brain without me falling apart after. I’m relearning how to write with a rewired brain.  I’m incredibly lucky to have a publisher who is absolutely amazing.

I’m on the final read-through of a novel I’ve been working on for four years—No Expectations. I’m looking forward to handing it off to my editrix at Exciting Publishing House in the near future.  It is a fairly fluffy romance novel, which is odd for me to write, and the main pairing is a hetero one. I swear I’m not broken!!!

My next novel goes back into the m/m paranormal romance genre, and I have a f/m/m polyamorous vampire novel on the backburner, waiting for when my brain can find the bloody, violent, and beautiful bardic realm that story requires.

If any of you are interested in a sneak peek at No Expectations, I have uploaded the first few chapters here.

I think I would be much further along in my writing process were it not for fanfiction. Lomonaaeren gifted us all with more beautiful Harry/Draco stories this summer, and I’m pretty smitten with anything she posts. My current favorite is The Rising of the Stones:

HPDM slash. Soul-marks/soulmate AU. Draco, the Ministry’s best Auror, receives an assignment to chase an unexpectedly fugitive Harry Potter. But as he chases Potter down, Draco learns secrets the Ministry has been keeping from him, secrets that could change him- and the wizarding world- even as he hunts Potter.

I would have to say The Secret History by Donna Tartt.  It’s so deliciously dark and breathtaking. Murder, magic, young love, and the unraveling of the human psyche. It’s such a beautiful story.

Running close behind in a very tight second place is Will Entrekin’s Meets Girl. I was lucky enough to pick up one of the few limited edition print copies when it was first released. It’s one of my most prized possessions. My Kaylee messenger bag is the other.

Thank you for reading my bits of pixie rambles; I’m off to work on making another of these crocheted Ewok hooded scarves as my girls claimed mine for their costume bin.

Much love and many thanks to Karin for hosting me.

2 thoughts on “Those Crafty Pixies…”