Hi there, I’m Susi and I’m a designer, seamstress, crafter, writer tinkerer, loom knitter, clay potterer, actress, singer, dreamer, reader and vague procrastinator…in other words, a Maker.  That’s how I’ve come to identify myself because “seamstress” doesn’t really cover it but that’s how I’ve made my living for the last 30 years or so.

I ‘met’ Karin on Facebook through a beloved mutual friend and she asked me if I’d like to guest blog.  I’m delighted to!  The biggest challenge (since I’m also in my busy season with Renaissance festival costuming) is trying to decide *what* to post about, so during some canoodling with Karin, I thought “OH, the tree!”  So that this is about.

You see, I do all sorts of sewing. MANY weddings, original designs (as seen above) and costuming; historical, fantasy, cosplay and crossplay and…LARP.  Yes, I LARP.  Yes, even at my age. (I don’t know how to act my age, I’ve never been this age before!)  What is LARP?  Live Action Role Playing;, much like D & D but you actually go out, camp in the woods, put on costumes and play the characters and bash each other with foam and plastic weapons.   Loads of fun! This one is on an Arthurian theme, with the fantasy races thrown in.  And I make costumes for those who hire me to do so.  This one guy, Kevin, commissioned me to make him a dwarf costume, with the key design element being the World Tree. He found a lovely cloak clasp and wanted that same tree on the back of his cape.

It just so happens that this was the same time as the lovely images of Game of Thrones (which I have not watched, no, not me!) costumes were coming out with all that gorgeous embroidered detail all over them.  So my Muse woke up, raised its domineering head and said, “YOU WILL DO THIS!”  When I told Kevin, his face lit up.  I said, “you know this is going to blow your budget, right? And it’s going to take a VERY long time” (Prophetic words, there!)  He said, “Yes, but it will be SO COOL!”  So here’s what I drew up: 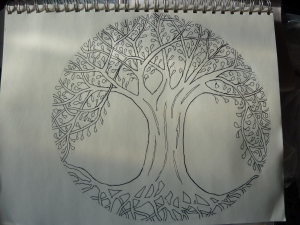 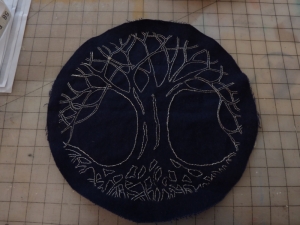 I told him that I would carry it around with me and work on it in non-shop hours so I could justify charging him half my hourly rate.  See, I have a habit of carrying around some craft project to keep my hands busy during meetings, get-togethers, services and Downton Abbey watches which also helps me to stay awake.  Because of all the wonderful qualities I inherited from my father, falling asleep during meetings was definitely one of them.  Meditation? Yeah, right. I take a “sacred nap” every time.  And as a good practicing Pagan, that’s just embarrassing.  So for the last three years, I have taken this tree with me wherever I went, to work on, bit by bit.  I have a lovely part time job singing in a Presbyterian church as the Alto section leader and so I have sat up in the choir loft and worked on this for three years; the darling Tenor said, “I’m going to miss it, I feel like I’ve come to be friends with it!”  Such a darling man he is, no matter that there’s 2+ decades between us,  we share similar senses of humor and when we go *off* the Soprano looks at us like we’re crazy; that’s ok, we’re slowly trying to corrupt her.  Poor girl, I think she was middle-aged at ten. But I digress…

It is all free-hand with stitch after stitch and frankly, I don’t know what that stitch is called, if there is a name for it.  It’s just stitch after stitch after…and with the thread raveling and breaking so easily, that means a lot of little lengths of metallic thread. You get the idea.  The hardest thing in any free-hand stitching project is keeping the tension right; too tight and it buckles, too loose and the stitches don’t look right.

Well, it seems that I didn’t take any middle of the project pictures so here’s the completed tree when I’d just started beading it, with the backdrop of the cutting table in my shop.

I had some green malachite chips in my bead stash and a friend gave me peridot chips so that’s what I used to make the leaves of the tree, just randomly placed.  However, I rapidly discovered that the combination of metallic thread and beading needles is THE STUFF OF NIGHTMARES so I changed to using gray rayon thread instead; much easier to keep one’s sanity or whatever sanity one may have remaining.

So after a little over three years of stitching on this thing, here it is in completion (resting on one of my bead boxes as I was in a jewelry making fit yesterday.

It will go on the back of his cloak with Velcro and then come off for him to hang up in his apartment in between gaming weekends.  I’ve threatened him within an inch of his life to take good care of it.  So it will be his when he finishes paying me for it.  That was something like 175 hours of work, nearly as I can figure.  Yep, those hours add up, even then giving a discount.

Here’s a close up of the tree. 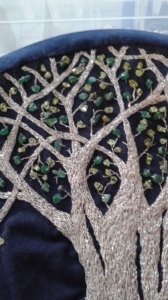 I gotta be honest, it’s going to be hard letting this one go.  And of course, I’m planning the next one now. But I seriously want to find a patron to help pay for this one.  I want to do a four panel season tree.  I figure it’s going to take about a decade. 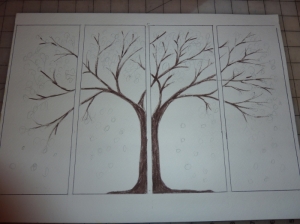 Here’s the idea from a sketch I did for a water color and tissue paper quartych (like a triptych but four panels rather than three…is that even a word? It is now!)  I did this one for a client with spring-summer-fall-winter running from panel to panel, turned out really neat, I thought. And now of course, I’m considering an embroidered and beaded one. Because I have to have a project to carry around, right?  I’m thinking to maybe contact one of the local synagogues and see if they might be interested in sponsoring the project.  You don’t know unless you ask, right?

So here’s your candid glimpse into the life of a Maker.  Now I’m on to brown Little Red Riding hood costume and then Renfaire garb.  And maybe I’ll slip in making a batch of apple butter ‘cause I’m all out. Oh, the horror!

I meant to link to the books I’m reading now but I’m out of time; clients on the way!

Many thanks to Karin for allowing me to guest!