My name is Jennifer Lee and I am an old friend of Karin’s. I am so glad to have this chance to say hi and introduce myself to other friends of Karin and hope that you don’t mind my ramblings for a bit in place of Karin’s usual posts.

I would commonly refer to myself as a writer, even when I’m seriously suffering from the writer’s block. I write in feast or famine blocks. Right now I’m starving for some good writing time, but I know, eventually, my brain will kick back on and I’ll be feasting on short stories and novels. I love to write and I have ever since I was a little girl.

I’ve always told myself stories, even before I could write. When I was nine years old, I decided to write my first book. I sat down and penned out the cover page and then set about to do the table of contents…before the book. I guess as a child I didn’t understand that just because they appeared before the story in the book, they weren’t written first. I remember wondering how writers knew how many pages each chapter was going to be before they had even wrote the book. I decided that each of my chapters would be four pages long. Then my evil sister stole the book from me before I could even start with Chapter 1. But…it was my start.

I have since figured out how a table of contents works and I have managed to write many things. I have one finished novel, a good portion of its sequel, and many short stories. But the road to writing and finishing a full novel was hard for me to travel. As a person with chronic severe depression and anxiety, I often find it hard to focus and stay on track. I am constantly having to fight not to sabotage my successes and even though every writer is their own worst critic, I feel like I’m extra harsh on myself. It took a long time for me to be able to be confident enough to think that others would want to read my ramblings. Fanfiction was instrumental in this process.

I started out with Buffy the Vampire Slayer fanfiction. They weren’t my characters. This wasn’t my world. Somehow that made it easier for me to share my work with others. I got rave reviews. So I wrote more. I posted them on websites and won little community awards. One of the best fanfiction writers in my little corner of the interwebs agreed to co-write a story with me that then got me even more recognition. I made my own website. I was hooked. I moved on to Harry Potter fanfiction and I naturally combined the two worlds. I have no idea how many words I’ve written, all said and done, in the name of fanfiction, but I know it would be several books worth.

Eventually, I had many people in my life tell me that I really should be putting my efforts towards writing my own characters. I have some great friends and family who eventually convinced me. So I gave up fanfiction and started writing my own worlds and my own characters. I finished my first novel back in 2009. It’s still unpublished, but I’m in the process of finding an editor for it now. I think I’m finally ready to see it put into print. I have written many short stories and eventually, in 2015, I started my own independent publishing company called Constellation Press. I have published several short stories and I’m now working on several stories.

Most recently published is a serial revolving around a strong female lead in a fantasy story. It follows the life of Sonja the Fox, woman warrior of her tribe who must fight the intolerance shown to her tribe while struggling to co-exist peacefully among those who would rather not. You can check this series out by clicking the picture below, which is the cover of the first set in the series. Each serial contains three short stories or short chapters of the story and you can get the three for only $0.99 on Kindle. If you have Kindle Unlimited, you can also borrow this and any of my other stories as well. 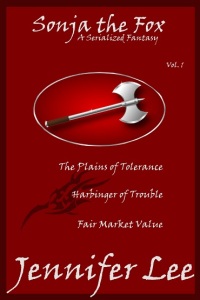 I have so many publications planned, not the least of which is finishing Sonja’s story. I am also currently working on a young adult story about a princess in an a-typical matriarchal monarchy meant to teach young girls about empowerment and equality. This is a very personal project to me as the main character is named for my daughter. It’s meant to be a handful of the lessons I’d like her to know such as self-sufficiency, strength, and gold old girl-power!

I also have about half of a novel finished that is my first real romance novel. This novel follows Julian. Julian is a man who was driven away from love by a heartbreak but finds it again from an unlikely source. He takes up an instant disliking to a man on his best-friends’ Facebook page, only to meet him in person and be drawn to this man who seems to stand opposite of Julian on every topic of debate he’s ever come across. I’m writing this novel for my sister (not the evil one who stole my first book…maybe if she hadn’t she’d get a novel of her own :P) who first introduced me to MM stories.

Anyway, a lot of good things on the horizon…if I could just get past this block!! I highly encourage you to check me out. You can do so by checking my Facebook page, Twitter, or Amazon Author Page.

Aside from writing, I do love to read. I don’t read as much as I used to. When I was very young, I fell in love with reading almost immediately after learning how to do it. I was reading full-blown adult books as a pre-teen and I’m sure anyone who went to grade school on up with me could tell you that I was never without a book. I have a sizeable library both digitally and physically, although I’ve been trying to make it smaller where I can. As an adult sized person with a child sized person relying on me, a job, several hobbies, and just life in general seeming to love to get in my way, I don’t read as much as I used to. But I am currently trying to fix that by re-reading some of my favorites. I am currently reading Kim Harrison’s Rachael Morgan series in the hopes of finally finishing the whole thing. I was gifted the last books in the series ages ago and have yet to read them. If you love supernatural books and have yet to read these, I highly recommend them. A very imaginative world and compelling characters.

I read a variety of genres and age groups. I love Harry Potter more than I can say. I liked Twilight more than I thought I would. Charlaine Harris is a favorite author. Other than her Sookie Stackhouse books, she also writes some mystery series I like. I love the Hunger Games, even the third one. Terry Goodkind is my favorite fantasy writer. Jude Deveraux is a great read if you’re looking for old-school romance.

One barrier to my ability to read (as well as do anything productive) is my daughter. Her little face is too cute to pass up. 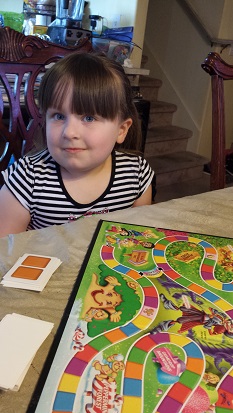 I suspect that another barrier to my ability to read so much is all of my extra-curricular hobbies. I have a few. Many of them are crafty things that I like to do from time to time to keep me sane.

I used to (and still do occasionally) love to bead necklaces. I have a gazillion beads because buying beads is FUN! More fun than actually putting them all together, unfortunately. Usually, when I make something it is for someone else, so I unfortunately do not have pictures of this. Sad Panda.

I do sometimes love to draw and create art. I actually love to do this but have more love for it than talent for it. Still, I can sometimes pull out something that even surprises me. I took an art class for college and my teacher had us scribble all over a piece of white paper with charcoal and then erase an image out of it. I was trying to recreate that at home with a stuffed animal as my model and created this picture named “Pup.” He’s the cutest, saddest little thing! 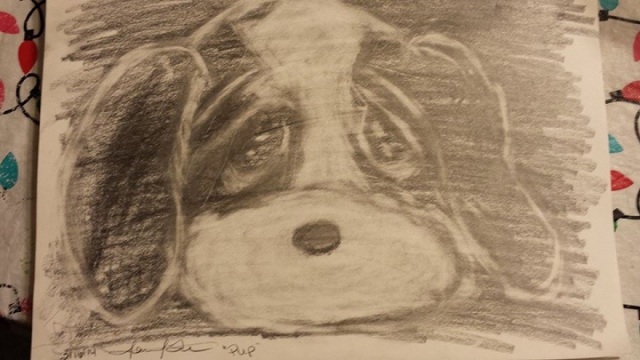 I have always loved to color but with the craze of adult color books, I have much more variety than children’s coloring books! Although I do still love them as well. (First picture below is using the medium of crayon, the second uses color pencil, and the unfinished third uses marker.) 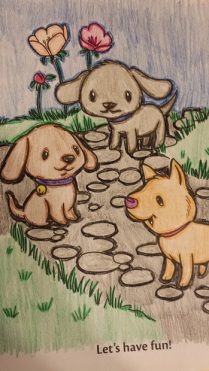 I basically will try most things once! I have done needle point (which I love to do but my deteriorating eyes and severe carpal tunnel makes hard for me to manage), crochet, puzzles, food art, and video game art. I do happen to have a picture of what I call food art. This last Easter, my gift to myself was making a truly too-sweet-to-eat Easter cake. The only person who could handle having more than one piece was my daughter. The cake is a double layer pink and yellow velvet cake with dyed frosting topped with dyed coconut meant to imitate the grass you might find in an Easter basket, a lollypop forest, the chocolate Easter bunny and his “eggs.” It was pretty anyway. Please be so kind as to ignore the counter clutter.

Video game art is something I’ve been more focused on as of late. Right now my medium is Minecraft. For those of you who have played it, you may not have a hard time understanding what I mean by “art” but for those of you who have only just heard of it or who have played but haven’t experienced building in Minecraft, might need a little explanation as to why I attach art to this hobby. Essentially, Minecraft is a sandbox game. You can create many different things in Minecraft. Some people have used this game to make large 3D pixel art and some have used it to make fantastically elaborate castles and landscapes. You are limited only by your imagination and the blocks the game gives you to create with. I enjoy it because it is a creative outlet and a bit of a puzzle. Out of blocks, half-blocks, stairs and fencing, you have to create something that mimics closely the real object you are trying to replicate. Below are a couple of houses I’m working on. These are based off of tutorials that I’ve seen, but there is so much more out there. (The first house is a Tudor style mansion that I am not finished with. The second is also incomplete and is a townhouse.) 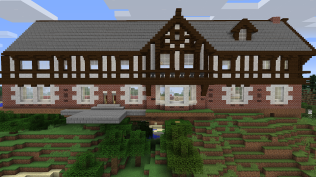 So, that’s me in a huge, oversized, and probably longer than necessary nutshell! I hope you’ve enjoyed getting to know a little more about me! Thank you again to Karin for giving me this chance!

One thought on “A Piece of Jennifer Lee”